Close Menu
COVID-19 Notice: Our office remains open, although for safety most employees are working remotely. Please call the office between 8 a.m. and 4:30 p.m. and we will be happy to assist you!
Manchester Personal Injury Attorney / Blog / Blog / Patients Potentially Exposed to Fatal Brain Disease in New Hampshire and Massachusetts 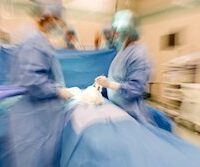 Eight patients at Catholic Medical Center in NH and five patients at Cape Cod Hospital in MA are being monitored for signs of a fatal brain disease. This was the result of potentially being exposed to contaminated medical equipment. The 13 patients underwent neurosurgery or spinal surgery at the hospitals this summer. They may have been exposed to Creutzfeldt-Jakob Disease (CJD). All 13 patients have now been notified by public health officials.

Medical equipment used on the 13 patients was previously used on a patient suspected of having CJD. The equipment was not properly sterilized after the procedure. Medical devices are generally sterilized using heat. However, the World Health Organization recommends equipment that may have come in contact with proteins that cause CJD be disinfected.

The now-deceased patient had undergone neurosurgery at Catholic Medical Center. An autopsy is now underway to confirm the presence of the proteins that cause CJD.

According to the Centers for Disease Control and Prevention, CJD strikes fewer than 400 people a year in the United States. Victims show signs of memory loss and cognitive difficulty early on. The ailment is “rapidly progressive and always fatal,” the CDC says.

If you have been injured by another person’s careless acts, contact the NH personal injury attorneys at the NH Injury Law Office of Manning Zimmerman & Oliveira PLLC. We may be reached at 603-624-7200, by email at info@MZLawNH.com, or by using the “contact us” or chat feature on our website.