Close Menu
COVID-19 Notice: Our office remains open, although for safety most employees are working remotely. Please call the office between 8 a.m. and 4:30 p.m. and we will be happy to assist you!
Manchester Personal Injury Attorney / Blog / Latest News / Congratulations to the 2019 Marilla M. Ricker Achievement Award Recipient: Attorney Maureen Raiche Manning 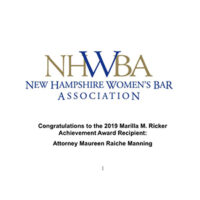 The NHWBA is pleased to announce the selection of Attorney Maureen Raiche Manning as the recipient of the 2019 Marilla M. Ricker Achievement Award. The Ricker Award honors an outstanding woman lawyer in New Hampshire who has achieved professional excellence and paved the way to success for other women lawyers, advanced opportunities for women in the profession, and/or performed exemplary public service on behalf of women. Attorney Manning clearly exceeds all of these criteria.

Attorney Manning was nominated for this award by four different attorneys over multiple years. They wrote of her with clear admiration and appreciation. She was described as “always available to help other women lawyers and to mentor newer women lawyers” and as someone “I can always reach out to.”

Attorney Maureen Raiche Manning has experience in all areas of civil litigation, including representing victims of personal injury, workers’ compensation and wrongful death cases with a proven record of success in New Hampshire federal and state courts. She is a lifelong resident of Manchester and the mother of three adult sons.

Attorney Manning is well-deserving of this award, as, in the words of one of her many nominators, she “was instrumental in starting” NHWBA. Another noted her “path of exemplary public service on behalf of women” and “commitments to preserve the Winnie McLaughlin Scholarship.”

Attorney Manning was honored at the 22nd Annual Fall Reception on October 17th, held at the McAuliffe-Shepard Discovery Center in Concord.

By Law Office of Manning Zimmerman & Oliveira PLLC | Posted on December 19, 2019
« Where do Most Slip and Fall Accidents Occur?
Single-Vehicle Accident in Manchester, New Hampshire: Are You Always at Fault? »