Close Menu
COVID-19 Notice: Our office remains open, although for safety most employees are working remotely. Please call the office between 8 a.m. and 4:30 p.m. and we will be happy to assist you!
Manchester Personal Injury Attorney / Blog / Personal Injury / Can You Recover Damages After a Snowmobile Accident in New Hampshire?

Can You Recover Damages After a Snowmobile Accident in New Hampshire? 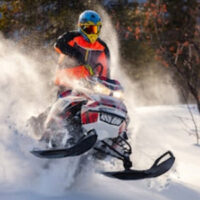 Riding a snowmobile can be a thrilling experience for people of all ages. However, with all that excitement and fun comes hazards and risks associated with snowmobiling.

Snowmobile accidents are not uncommon in New Hampshire during winter months. One such accident in NH has recently left a woman and her 15-year-old passenger injured.

A report by WCAX says that New Hampshire officials had to use a tracked vehicle to rescue a female snowmobile rider and her 15-year-old passenger after their rented snowmobile crashed into a tree.

The accident involving a woman from Puerto Rico occurred on New Year’s Eve. The female rider suffered severe injuries, while the extent of the teenage passenger’s injury remains unclear. Both were said to be wearing helmets. Officials say inexperience is considered the primary factor in the snowmobile accident.

But inexperience is not the only cause of snowmobile accidents. While excessive speed is considered the most common contributing factor in snowmobile crashes, other causes include:

When riding a snowmobile, follow these tips to ensure property safety:

Can You Recover Damages After a Snowmobile Accident?

Just like victims of car accidents, victims of snowmobile crashes also have legal rights. Drivers or riders who are negligent, reckless, or careless must be held legally accountable for the resulting injuries.  . An injured person can recover damages after a snowmobile crash by suing the owner and operator of the vehicle, or others responsible for the crash.  For example, if the snowmobile was rented and the crash happened due to a mechanical error or inadequate maintenance, the injured party may bring a claim against the snowmobile rental company..

Compensation following a snowmobile crash may include medical expenses, loss of income, pain and suffering, and many more. Contact a Manchester personal injury attorney if you were hurt in a snowmobile accident. Speak with our lawyers from the Law Office of Manning Zimmerman & Oliveira PLLC by calling 603-624-7200.

By Law Office of Manning Zimmerman & Oliveira PLLC | Posted on April 13, 2020
« When Can You Get Enhanced Compensatory Damages in New Hampshire?
Can You Obtain Workers’ Comp Benefits if You Contract COVID-19 at Work in New Hampshire? »