Close Menu
COVID-19 Notice: Our office remains open, although for safety most employees are working remotely. Please call the office between 8 a.m. and 4:30 p.m. and we will be happy to assist you!
Manchester Personal Injury Attorney / Blog / Car Accidents / New Hampshire Law Requires Motorists to Remove Ice and Snow from Vehicles 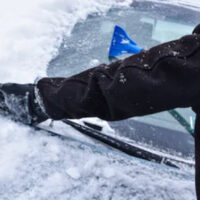 Did you know that there is a New Hampshire state law that requires NH motorists to remove snow and ice buildup from their vehicles? The legislation is known as Jessica’s Law and was enacted after a 20-year-old woman died when ice flew off a moving motor vehicle, hitting another car, which then collided with the woman’s vehicle.

The young woman’s mother pushed New Hampshire lawmakers to pass the law, known as the Jessica Lunsford Act, to prevent other families from having to suffer the tragedy she endured. Forty-two other states also have this legislation.

What Happens if a New Hampshire Driver Violates Jessica’s Law?

Under Jessica’s Law, drivers who fail to remove snow and ice from vehicles are fined between $250 and $500 for first offenses. For subsequent violations, the fine increases to between $500 and $1,000.

In December 2019, a New Hampshire man was fined $310 for driving with about a foot of snow on top of his car.

Failure to abide by Jessica’s Law may result in a civil personal injury lawsuit if a New Hampshire motorist causes a car crash due to his or her failure to remove snow from the vehicle’s roof and other parts of the car. The at-fault driver may be ordered to pay compensation for the resulting damages.

Violations of Jessica’s Law in New Hampshire are taken seriously by police officers because flying snow and ice can cause deadly car and truck accidents in Manchester and other parts of NH.

The Dangers of Snow and Ice Buildup on Vehicles

Statistically speaking, icy and snowy road conditions cause nearly 2,000 deaths and close to 137,000 injuries each year. While removing ice and snow before traveling does not take much time, many New Hampshire motorists still fail to do so, even despite the fact that they could be fined.

It often happens that snow and ice accumulate while a motorist is already driving. For this purpose, you should keep a roadside safety kit in your car to remove ice and snow when necessary. Additionally, check your vehicle’s brakes, tires, seat belts, lights, batteries, and other parts before driving during the winter season.

If flying snow or ice caused property damage to your vehicle or injury, you need to contact a Manchester car accident attorney at the Law Office of Manning Zimmerman & Oliveira PLLC to pursue compensation.

If your injury occurred because another driver did not remove ice or snow from their vehicle, that New Hampshire driver would be held liable for the damages caused by negligence. You may be entitled to damages if someone violated Jessica’s Law in New Hampshire, and that violation caused your losses or damages. Call our lawyers at 603-624-7200 to discuss your options.

By Law Office of Manning Zimmerman & Oliveira PLLC | Posted on March 31, 2020
« What Does It Mean if You Have Chest Pains After a Car Accident?
Accidents or Injuries Resulting from Trucks Reversing »