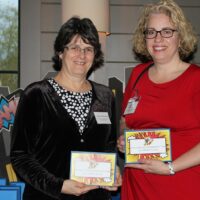 May 21, 2019 – Attorneys Maureen Raiche Manning and Anna Goulet Zimmerman, partners with the Law Office of Manning and Zimmerman, have received special recognition from the New Hampshire Women’s Bar Association (NHWBA). Both attorneys were honored with the SHERO awards at NHWBA’s 20th Anniversary celebration. The awards are designed to celebrate pioneering women who serve as role models and who make a difference for other women in the practice of law.

Over the last year, a total of 70 women who are admired and serve as role models, have been nominated by their peers and colleagues for the SHERO Awards. The nominees include both young and veteran attorneys, and those who work as solo practitioners, at large firms, and in the public sector. Judges, professors, and entrepreneurs are among those who have been chosen by their fellow attorneys.

“We are so pleased to be honored by the New Hampshire Women’s Bar Association with their SHERO award,” said Attorney Maureen Manning. “We have spent decades working for gender equality and fair representation for all women in the legal community. To be nominated by our colleagues is an incredible honor and to receive this special recognition is particularly meaningful.”

About the Law Office of Manning & Zimmerman

The Law Office of Manning & Zimmerman PLLC has a long history of effectively representing clients state-wide who have suffered injuries because of someone else’s negligence. Our Manchester, New Hampshire personal injury law firm strives to provide clients the highest standard of legal assistance.

By Manning & Zimmerman | Posted on May 22, 2019
« Can You Get Compensation for Pain and Suffering After a Car Crash?
Motorcycle Crash Lawyers Discuss Rider Safety »